Cochin city of Kerala has an interesting multi-hued culture. Read on about the culture heritage of Kochi, India.
Cochin: Cochin Culture 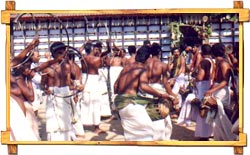 The culture of the port city of Cochin may be understood by studying various factors, like the behavior and belief patterns of its residents, their language, religions and so on. When viewed from this perspective, the city has a colorful culture. On one hand, it has the St Francis Church, an international shrine because built by St Thomas, the apostle of Jesus Christ. On the other hand, there is Kalady, the birthplace of Adi Shankaracharya. Here's information about some major factors influencing the culture of Kochi city of India.

Cochin History
The port city of Kochi has a very colorful and rich history. It was formerly known as Cochin and used to serve as an important trading center in the ancient times. The city occupies a very strategic position geographically, being flanked by the Western Ghats on the east and the Arabian Sea on the west. More

People
Flanked by the Western Ghats on the east and the Arabian Sea on the west, the port city of Cochin has long been a favorite destination for explorers, traders and seafarers. From time to time, this region witnessed successive waves of migration by the Arabs, British, Chinese, Dutch, and Portuguese. More.

Religions
The important religions of the Cochin city of Kerala are Hinduism, Christianity, and Islam. Religions like Jainism, Judaism, Sikhism, and Buddhism are also practiced here, though they have comparatively smaller followings. A survey of Kochi's demography indicated that it's almost 47 percent population follow Hinduism. More.

Arts & Crafts
If there is one thing in particular you can cease worrying about upon reaching the port city of Cochin, it is shopping for mementos and gifts items. The local arts and crafts industry in Kochi is so strong that you will find numerous shops there selling handicraft items. More.

Languages
Since ancient times, the port city of Cochin witnessed successive waves of migration by the Arabs, British, Chinese, Dutch, and Portuguese, who came here mainly for the purpose of trade. Many of these groups went on to reside in Kochi, before migrating away to other lands. More.