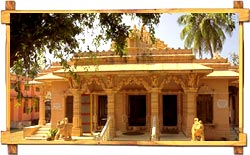 From the very beginning, various communities and groups have lived in peaceful harmony in the Cochin city of Kerala. This port city is like a melting pot of cultures and people from the Hindu, Christian, Muslim, Jews, Buddhists, Sikhs, Jains and other religions reside here. One finds religious places of different ethnic communities situated within a distance of few kilometers from each other in the city. Here's information about some worship places located in and around Cochin City of India.

St Francis Church
St Francis Xavier's Church at Fort Kochi was built in the year 1503, by the Portuguese traders. They came here with Admiral Pedro Alvarez de Cabral, via the same route taken by the legendary Portuguese explorer Vasco da Gama, who landed at Calicut in 1498. More.

Jewish Synagogue
The Jewish Synagogue in the port city of Kochi is the oldest synagogue in all the Commonwealth of Nations. Thus, it comprises the topmost slot in the itinerary of the tourists visiting the city. Malabar Yehudan People, or Cochin Jewish community, constructed this synagogue in 1568. More.

St Mary's Church
Vallarpadam is a cute little islet located in the middle of the Cochin backwaters. This islet is a major Christian pilgrim center because of the St Mary's Church situated in the eastern region. It stands like a gem on the island's physique. More.