Cochin is serviced by a number of airlines. Read about the cheap and other flights operating to and from Kochi, India.
Cochin: Cochin Travel Tips: Cochin Flights 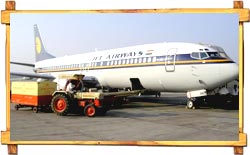 The state of Kerala has three international airports - one each at Kochi / Cochin, Trivandrum and Kozhikode and all of them are situated within a stretch of 600 km. Official data states a total of 25 lakh international footfalls were recorded in all three airports in the year 2005, in which Cochin airport was ranked as the best performer. The airport registered domestic air traffic of 5.9 lakh passengers that year. International air connectivity with Cochin International Airport is pretty good.

Infact, the airport is counted amongst the most well connected ones in India. There are a decent number of domestic flights operating to and from the Cochin airport from different destinations in India like Delhi, Bangalore, Hyderabad, Chennai, Kolkata, Mumbai, Goa and Jaipur. The city is also very well connected by air with the middle-east countries as many Keralites stay and work in these countries. You can also get cheap flights tickets for Kochi offered by the domestic airlines.