Marine Drive is one of the most popular tourist attractions in Cochin/Kochi city, kerala.
Cochin: Cochin Tourist Attractions: Marine Drive 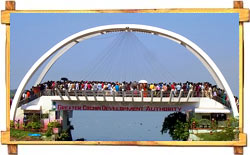 Marine Drive is a beautiful promenade in Kochi (Cochin), Kerala state of India. The Marine Drive is built facing the backwaters of Kochi. It is a popular hangout for the local populace as well as the tourists.

Hundreds of people throng the Marine Drive walkway during the evenings to view the rising sun over the sea mouth, and feel the gentle breeze coming from the nearby Vembanad Lake . The Marine Drive walkway starts from the High Court Junction and stretches until the Rajendra Maidan. Several boat jetties dot the walkway, which has two bridges- the Rainbow bridge and the Chinese Fishing Net Bridge.