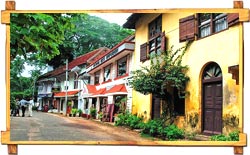 Highlight: Since Fort Cochin was under the possession of the Portuguese, the Dutch and the British at different points of time, the region still bear the influence of European architecture.

How to Reach: Once you reach Kochi City of Kerala, you can take a cab, auto-rickshaw or bus to Fort Kochi.

Even a casual stroll through Fort Kochi located in the port city of Kochi in Kerala is enough to make you feel transported to another world and time. The architectural style of the buildings and the town layout easily make Fort Cochin distinct from other cities and towns of Kerala. Since Fort Cochin was under the possession of the Portuguese, the Dutch and the British at different points of time, the region still bear the influence of European architecture.

Fort Kochi or Fort Cochin is one of the three main urban regions that constitute the present day Kochi city in Kerala, India. The other two regions together comprising the Kochi city are Mattancherry and Ernakulam. Interestingly, the port city of Kochi was initially a municipal town from 1866 to 1967. It was later in the year 1967 that these three principal municipalities and few adjoining areas were joined to form the new corporation of Kochi.

Fort Cochin is counted among the major tourist attractions of present day Kochi in Kerala, but it was earlier a fishing village of no significance during the pre-colonial Kerala. It was christened as Fort Kochi after this territory was given to the Portuguese in the year 1503 by the Raja of Kochi. The Raja gave the Portuguese the permission to build a fort near the waterfront to protect their commercial interests.

The fort that the Portuguese, thus, built here was named Fort Emmanuel and it is from the name of this fort that 'Fort Kochi' derived the first part of its name. Fort Emmanuel was, however, later destroyed by the Dutch. It was behind this Fort Emmanuel that the Portuguese built their settlement and a wooden church, which was rebuilt in the year 1516 as a permanent structure world famous as the St Francis Church in the present times. Believed to be the first church built by Europeans in India, it is here that the body of Vasco Da Gama was buried initially before his remains being shipped to Lisbon in Portugal later.

Since Cochin in Kerala was an important trading zone for foreign travelers and seafarers, the ownership of the Fort Kochi region passed many hands. It, however, remained a Portuguese possession for almost 160 years until the year 1683,k when the Dutch captured the territory. They then held Fort Kochi under their possession for 112 years until the year 1795, thereafter which the British took over control by defeating the Dutch. The 444 years of foreign control of Fort Kochi or Fort Cochin finally ended with India gaining independence in 1947.