There are a number of cinema halls (cineplexes) in Cochin where you can pass your time. Explore movie theaters (multiplexes) in Kochi, Kerala.
Cochin: Cochin Entertainment: Cochin Cinema Halls 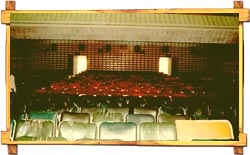 In case your sightseeing spree is over in Cochin and you still have a day or two left before packing off to some other tourist destination, it would be a really good idea to catch a Malayalam film. There are numerous cinema halls in Kochi, which showcase not only local Masala flicks, but also the new Bollywood releases. If you are lucky enough, you may also get to see a live film shooting in beautiful locales like Bolghatty Palace, Fort of Kochi or any of the islands in the Cochin backwaters.

Also every year, the Cochin Film Society hosts the Cochin International Film Festival (CIFF). Considered as one of the premier film societies in Kerala, the Cochin Film Society screens the best of Cochin cinemas at the CIFF. So if you plan your Cochin holiday properly, you may be able to catch some good Malayalam films here. Apart from multiplexes culture that is gradually catching up in Kochi, there are also numerous local movie halls in Cochin where you can see English, Hindi and regional language cinema. Here are the names and addresses of some good cineplexes in Cochin: